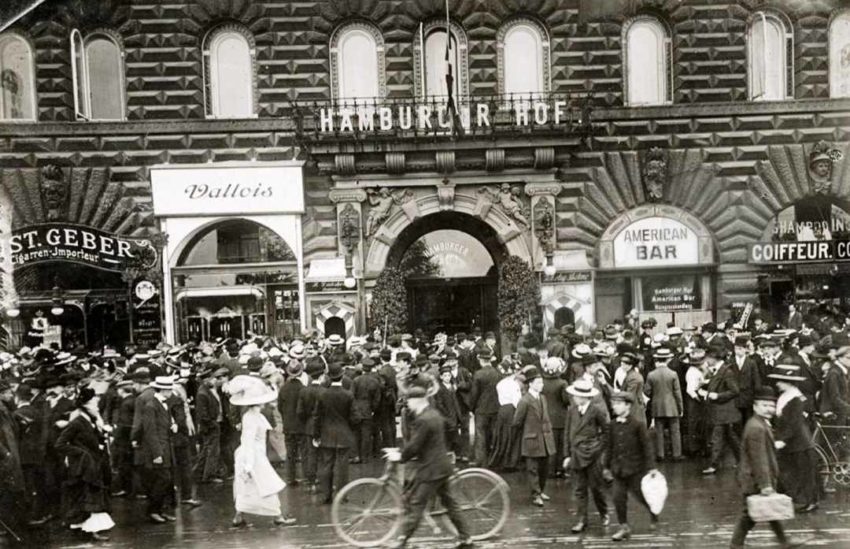 A prose miniature by Oliver Wieters

On the late evening of 14 May, 1912, a distinguished looking elderly man with a twirled upper lip beard stepped outside the luxurious Hotel „Hamburger Hof“ in the North-German town of the same name and let his gaze wander around the illuminated Jungfernstieg boulevard. He took a deep breath and felt relieved. After a long and exhausting train passage from Southern France, his wife and his four children were sleeping inside the hotel suite. Outside only a few people were still around. Today was Tuesday and Hamburg was a trading town, so its busy inhabitants had to get up early next morning. Shortly before, the man had asked the night manager politely which time it was and had received the desired answer: „10 pm, Herr Graf von Kronburg“. Or did he say 9 pm? Nevertheless, his secret was in good hands and so his mood heightened.

He turned left and headed for the Gänsemarkt. He liked the name of the place. It sounded innocent and reminded him of the fairytales of his compatriot Hans Christian Andersen. Strollers saluted politely and the man lifted his hat and smiled. He could have passed as a wealthy businessman like so many others in this booming town who were looking for a good business opportunity. Everybody was talking of the Elbe tunnel – a marvelous expression of both inspiration and engineering art! And the railway system – a technical masterpiece! Not to mention the newly erected main Church and the thousands of ships in the huge harbour and in the Speicherstadt, a quarter of warehouses and storages the size of a small town. Hamburg was Germany’s gateway to the world, a paradise for merchants and bankers. But this man, who speeded up his gait, was neither a merchant or a banker, he was anything but an ordinary man. Since his father had died, he was the owner of the Danish crown, he was the new King. His name was Frederick VIII. But for this evening he had decided to wear an ordinary hat and to go incognito with good reason. His steps were not guided by money but by an even more seductive matter: A matter of his desires.

It took him only a few minutes to reach his goal. He passed the Lessing monument with the stern looking poet and headed for the Schwiegerstraße, a narrow and rather dirty alleyway on the opposite side of the square. Here, close to the former theatre of the famous writer of enlightenment, was the home of one of the towns most expensive and exclusive brothels. The King turned around and checked the situation. Then he sighed and moved on…

He suddenly felt the unbearable power of an unearthly hand that quenched his heart. What happened? How did he get here? Who were all these people? Fredrick looked into the face of a man who tried to talk to him. He couldn’t answer, couldn’t reveal to him his true identity. Then he saw the uniform of a German policeman and felt his helping arms around his aching body. He saw the flickering lights of gas lamps while he laid in the back of a car that drove with high speed.

Some hours later one of his servants inside the Hamburger Hof realised that the King was still missing. He informed the hotel director who immediately started to run a search for his prominent guest in the surrounding restaurants. Without success. He contacted the police. While still talking to the constables, they received a message from a hospital in the harbour that the body of „an elderly, well dressed man“ was delivered earlier. They drove to the hospital and found the dead King. Two guards helped them to carry the body to a taxi. In the beginning, the cab driver refused to accept the delivery but was convinced by the help of gold. The King was brought back to the hotel. The next day, after his family was informed, the body was laid out in a bed with flowers and photographers were ordered to take photos of the famous man.

In Hamburg, a place that Frederick loved to visit, the rumours were numerous. Were did the King really die? In the hotel? On a bench a the Gänsemarkt? In a café close by? Or in the famous brothel? The numerous speculations would occupy historians for decades – long time after the friendly King, who died as Graf von Kronborg, was brought back to Denmark by train and put to rest in the Cathedral of Roskilde.